Khdemti uses cookies to ensure you get the best experience on our website.
GOT IT
LEARN MORE
Welcome to Khdemti
Blog
Post a mission
It's absolutely Free! 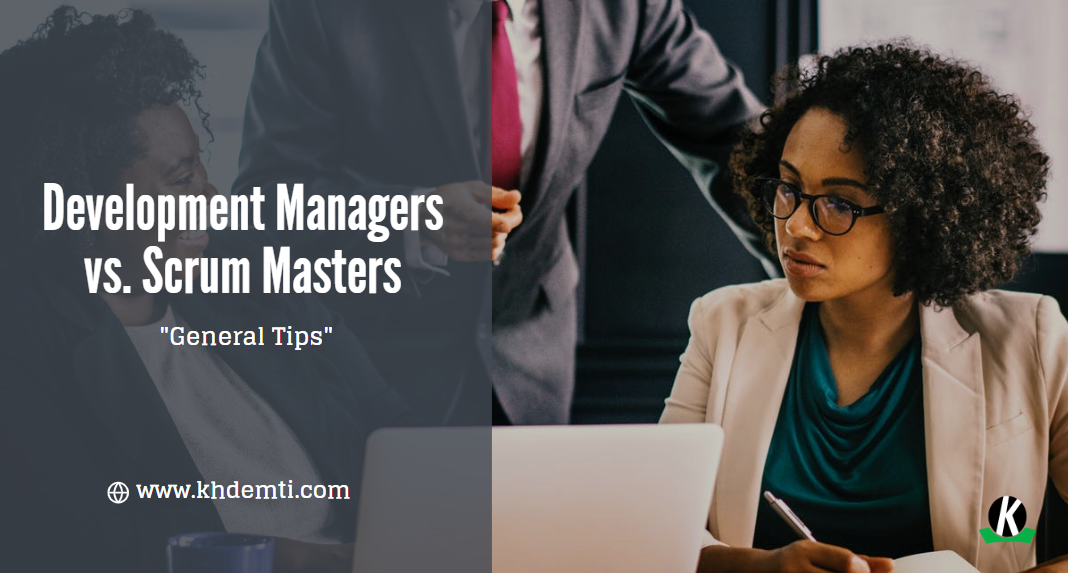 The word Project Management came into limelight only after the IT revolution in the early 90’s. Since then it has been commonly used in the world of Software Development. The two most common project management methodologies are agile and waterfall. Waterfall is the traditional methodology where feedback is received upon completion of the entire project. On the other hand, agile development is implemented through Scrum. The whole project is divided into short sprints and the dev team gets feedback after each sprint. This reduces the to and fro post project completion and ensures on-time completion.


Each software development methodology has its own advantages and disadvantages. However, the key difference lies in the way these methodologies are handled and the people who handle them, namely the development manager and scrum master. To a novice, the responsibilities of a dev Manager and a Scrum Master may seem overlapping; he may not see a huge difference. However, the two are quite different. Let us understand these differences in detail.

There are many risks involved at every stage of Project Management and by default, the Development manager is held responsible when such risks arise. The Scrum Master’s role, when considered from this angle, remains purely technical.

The Development manager is responsible for all inter-office communication pertaining to all projects. He is responsible for coordinating between departments for the various requirements that may arise during the development of a Project. The role of a Scrum Master remains zero in this area.
The overall responsibility of initiating, planning, designing, monitoring, controlling, and bringing the project to closure lies in the hands of a development manager. He is the decision-making authority, who chooses between the right and the wrong.
Does this mean the Scrum Master’s role is not as important as that of a Development manager? No.
The team of developers who work on an agile project usually called an Agile Team, adheres to the best practices specified in the methodology. The Scrum Master can be viewed as the head of the team. He acts as the key person who executes an agile project. Let’s understand his role in detail.


The Unique Role of a Scrum Master

Scrum Master is the team himself


Scrum Master acts as the windshield

The Scrum Master gets involved in the ground level work done by the Agile Team, unlike the Development managers who get involved in the planning aspect of Project Management. Scrum Masters enable the team members to perform in a balanced manner, protecting them from all the external disturbances that may pull down their efforts and slow their pace.

The Scrum Master is physically and mentally involved with the team playing a dual servant-master role to ensure what is planned is delivered on time. This is opposite to the role of the Development manager whose presence is felt more during the planning stage than during the real-time execution stage.

This is one of the crucial roles of the Scrum Master when compared to a Development manager, whose role is limited to inquiring about the status of the project from time to time. A good Scrum Master adds value at each and every step of the project and supports the team physically, mentally and emotionally. All his actions are targeted towards ensuring that the team successfully reaches the finish line within the stipulated time frame.

Scrum Masters play a focused role when it comes to motivating a team and taking the project to completion in a smooth manner. However, a Development manager’s role tends to be outside the team, doing the necessary coordination for resources and managing dependencies required to complete a project.
All said and done, every role in an organization is crucial. In fact, in reality, the roles of the Development manager and Scrum Master may intersect occasionally. However, a clear-cut understanding of the uniqueness of each role can help ward away any serious repercussions. The ultimate goal of both the roles is to complete the Project on time to meet the customers’ expectation and earn a decent top line and bottom line for the organization. If things are approached with this mindset, the roles will complement each other’s contribution, benefitting all concerned stakeholders.

Top 5 Advantages of Being a Freelancer Development Managers vs. Scrum Masters How to make freelancing your full time jobs How to get ahead in a career How to get started as a freelancer ? (Tips)

Support center : Do you have a question or inquiry ? We will be happy to assist!
Contact-us

Khdemti helps the best independents and freelancers to work in high-quality companies, in a flexible and well-paid way.

Using our technical knowledge and some of the artificial intelligence algorithms that we’re implementing, we select the best freelancers in a very short amount of time.